Yes, you CAN lose a ton of weight rapidly like the contestants on The Biggest Loser. They would weigh-in each week and lose 10-25 pounds a week. 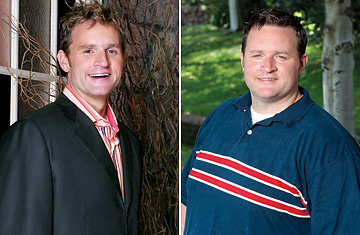 The winner, Ryan Benson, was able to lose a staggering 122 pounds!

So how is Ryan Benson doing these days?

A recent article in Time magazine looked at some of the former Biggest Loser winners. Benson gained back close to 90 pounds after the show was over.

But while the message of the show is inspiring, it is also unrealistic. The Biggest Loser achieves rapid transformations—contestants often drop more than 9 kg in a week—through calorie restriction, endless exercise and no small amount of dehydration that occurs behind the scenes. Ryan Benson, 38, an actor who works for a DVD distributor in Los Angeles, lost 55 kg to win the first season in January 2005 but says he regained 14.5 kg within five days simply by drinking water. Matt Hoover, 31, a motivational speaker based in Seattle, had a 7-kg rebound within a day of winning Season 2. Last season’s runner-up, Kai Hibbard, 28, an aerobics instructor in Alaska who says she spent the night before her final weigh-in hopping in and out of a sauna for six hours, consumed only sugar-free Jell-O for several days and wolfed down asparagus, which is a natural diuretic. “It’s amazing the things you learn in a weight-loss competition,” she says.

Benson said that as soon as the show was over, he regained “14.5 kg [32 pounds] in 5 days simply by drinking water.” So, what does this tell you?! It points to the fact that when anyone rapidly loses weight, (faster than 1-2 pounds a week) usually the weight loss is mostly due to water loss.

Also, the contestants in the show are exercising (with a trainer) between 4-5 hours a day. This creates a dramatic loss of water in their body!

Another factor is that they are on television, held accountable by the millions of viewers and (of course) a huge monetary prize at the end.

When you read my book, Get Thin—Be Happy!, on page 51, “Why You Do What You Do” explains all of this. Read it and you have your answer!

Comment0 | Share | Tweet | Share | Pin It | print | email
Category: Weight Loss
Disclosure of Material Connection: Some of the links in the post above are “affiliate links.” This means if you click on the link and purchase the item, I will receive an affiliate commission. Regardless, I only recommend products or services I use personally and believe will add value to my readers. I am disclosing this in accordance with the Federal Trade Commission’s 16 CFR, Part 255: “Guides Concerning the Use of Endorsements and Testimonials in Advertising.”

Please note: I reserve the right to delete comments that are offensive or off-topic.


Warning: A non-numeric value encountered in /home/customer/www/getthinbehappy.com/public_html/wp-content/themes/getnoticed/inc/widgets/widget-subscribe.php on line 43

Get a copy of the SAME audio my personal clients get when they join our Get Thin—Be Happy program in my office! Yours FREE!

I will never share your e-mail address with anyone else.

About Bryan & “Get Thin—Be Happy”

"What my clients have taught me is what this amazing book to reprogram your mind, become healthy, lose weight, and get happy is all about!

"By the way, I titled this book Get Thin—Be Happy! This doesn’t mean that you can’t be happy if you are not thin; that would be absurd. It only means that many, many people would and could lead a happier life if they lost the unnecessary weight in their bodies.